This all-in-one interactive display combines the best in PCAP Touch Screen technology with a stylish and secure kiosk. The screen resembles a giant tablet with the edge to edge glass tempered front and aluminium bezel. Designed for use in commercial applications the easy to use ergonomic design allows users to interact with the screen perfectly. The striking design, along with the built in dual OS PC, sets this solution apart from other touch screens on the market both in terms of functionality and aesthetics.

Experience the most versatile commercial touch screen kiosk on the market. With both Android and Windows operating systems built in to the integrated PC it cannot be beaten on flexibility; this screen has it all in one convenient package.

State of the art Projected Capacitive interactive technology offers the most responsive touch experience available while featuring sleek edge-to-edge glass. Designed for commercial applications, PCAP touch technology works by fixing a sensor grid between a layer of cover glass and the LCD panel, when a finger touches the glass the grid detects the coordinates of the touch point. Unlike other touch technologies PCAP is not affected by dust or debris on the screen surface. Our screens boast 10 touch points, allowing for smart phone-like touch gestures and multiple users, as well as offering superior optical quality.

Not only is the front glass face tempered, which makes it more durable and suitable for public use, but it is also plasma treated to give it an oleophobic coating. What this means is that it is more resistant to surface oil and moisture which Reduces the residue left by fingerprints. It also lowers the surface tension and friction, making touch gestures much smoother, improving the overall tactile experience for the user. All this is achieved without having an etched finish which means that the overall optical clarity is maintained to the maximum level.

Accurately displays image quality and colour depth at a 178° ultra wide viewing angle. There is no fall-off in colour accuracy and no diversion in contrast ratio at wide angles. From bright sunlight to the most challenging lighting environments these displays are designed to reproduce and maintain the ultimate colour temperature for lifelike images. The panel is also optimised for mounting in either landscape or portrait orientation.

The LED backlight used is not only eco-friendly but also ensures the display has enhanced brightness and contrast. This technology increases the lifespan and reduces the power consumption by around 30%. This form of light technology is mercury free; safeguarding this screen’s eco friendliness.

Built with commercial grade panel and components these displays are designed to run 24/7 in constant use; unlike domestic tablets. The panel also has a lifespan of over 70,000 hours of continuous use.

The 43” and 50” versions can be installed in portrait orientation as well as the standard landscape. This transforms the kiosk into an even more eye-catching display and makes it really stand out from the crowd.

The touch screen kiosk is an all-in-one solution with the integrated PC with Windows and Android. However if you want to connect an external PC or media player there is a secure and discrete internal locker on the rear of the display that allows you to integrate such devices seamlessly. Simply connect your device to the screen via VGA or HDMI (for the video signal) and USB (for the touch functionality). The screen will then serve as your computer’s interactive monitor. You can also extend the connections on your device, such as the USB ports, LAN port, Wi-Fi aerial and power cable to the external ports on the rear of the kiosk.

Once your kiosk is in place you can use the ports on the rear of the base to conveniently connect your USB, Ethernet cable, power cable or Wi-Fi aerial direct to the Touch Screen. The rear connections work whether you are using the built in PC or a third party device inside the internal locker.

The PCAP Touch Screen Kiosk can be used as a touch monitor if you connect your own PC or you can run your own touch software from the integrated Dual OS PC board with Windows and Android. However you can use our ground breaking new Touch Screen Content Management System that puts you in control as you create and deploy your very own interactive content. First, you create your custom layouts with our user friendly software that requires no knowledge of coding to use. Then deploy the content from your PC direct to your Touch Screens in a matter of seconds. Then you can let the content do the talking for your brand, company, service or product. 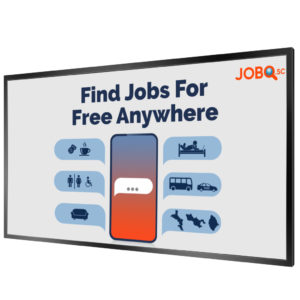